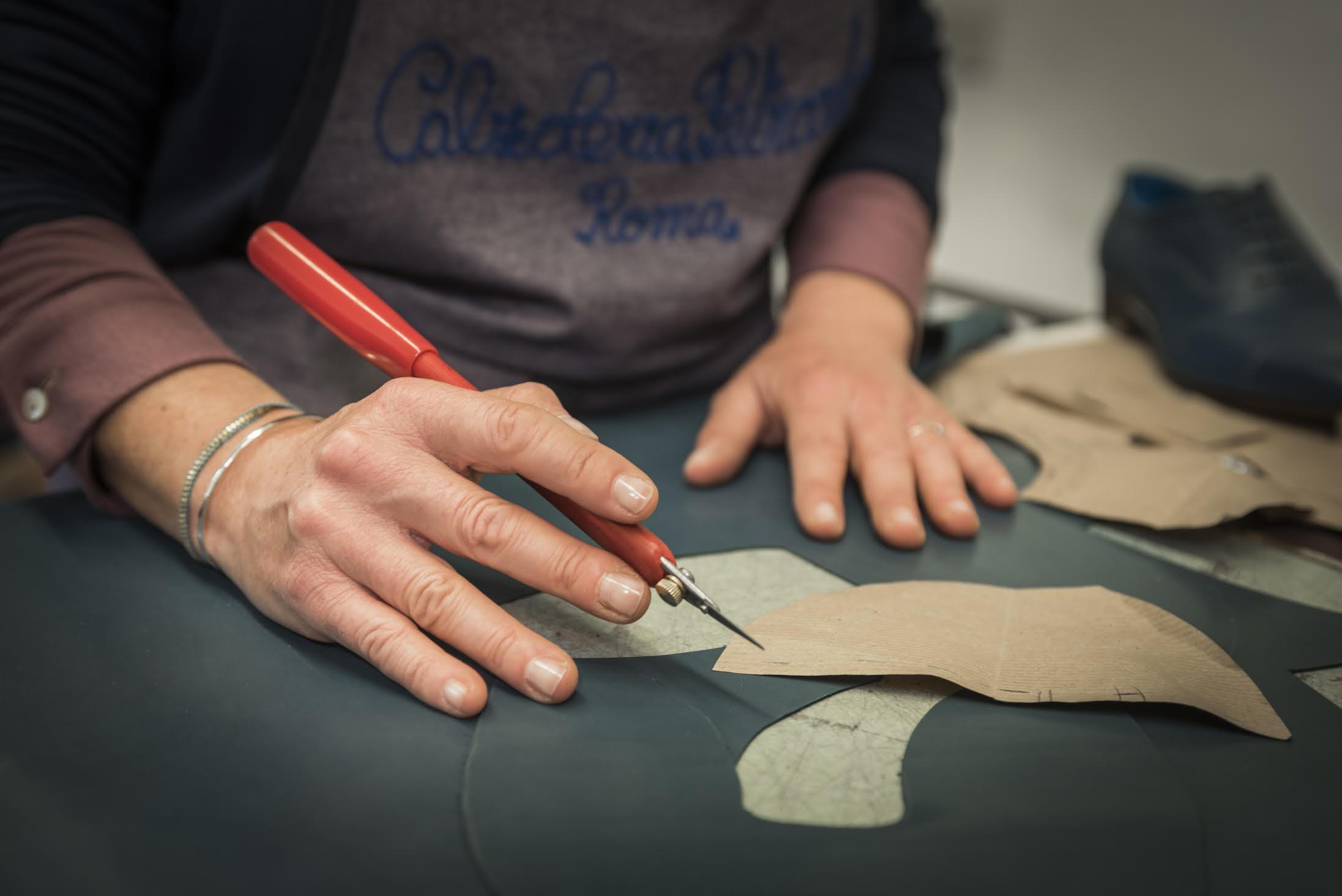 The craftsmen of Calzoleria Petrocchi have been producing ready-to-wear and bespoke or made to measure shoes by hand since 1946.

Our clients include cinema and television personalities, sports professionals and government and business representatives.

The excellence of our creations has been recognised at both the Italian and international levels. Above all, and most importantly, we remain convinced that making shoes is an act of love!

A passion which has endured more than 70 years

Tito Petrocchi opened the doors of the first Calzoleria Petrocchi in 1946 in the famous Via Sistina in the heart of Rome. When the Dolce Vita, the “sweet life”, invigorated and energised Rome as the fifties arrived, Tito began to work with the Sistina theater and costume designer Giulio Coltellacci in creating the shoes worn by Kirk Douglas and Silvana Mangano in the film Ulysses.

A series of important commissions for the film industry followed and major film stars such as Marlene Dietrich, Omar Sharif, Totò, Audrey Hepburn, Anita Ekberg, Mastroianni, Francesco Rosi, Valentina Cortese, Anthony Quinn visited the store in Via Sistina to have their feet pampered by Tito’s shoes. For more information regarding our famous clients, please see our dedicated page.

Tito Petrocchi loved all shoes, and women’s styles in particular. He reinvented the classic high-heeled pump or décolleté by incorporating exotic skins and geometric shapes, creating original and exciting shoes designed to decorate and embellish his client’s feet.

Silvana Mangano, a Petrocchi regular, wore our highheels when she danced in the 1954 film Mambo.Tito created a special heel for the occasion, as elegantly thin as a stiletto but with a wider base for comfort. The heel has become known as the Mambo heel.

Only one small example of his love for imaginative, creative styles.

The elegance and originality of shoes by Calzoleria Petrocchi was confirmed when Tito Petrocchi was awarded the Gold medal at the 1956 Exhibition in Munich, Germany. This was also the year that he was asked to create the shoes to compliment the Maison Gattinoni costumes worn by Audrey Hepburn and Mel Ferrer in the film War and Peace.

A meticulous craftsman, Tito Petrocchi sculpted and formed the shoes on wooden lasts until satisfied that they reflected the character and the personality of the client who would wear them. His clients, in awe of the expertise of this ‘oracle’ of shoe couture, accepted every suggestion he made regarding style and colour.

Tito was adored and respected for his eclectic creations, so much so that even now many years after his death, elderly clients return to the Calzoleria to offer to return entire collections of shoes made by the master. They consider the shoes to be part of their maker, and therefore the heritage of a time of refined styles, elegance and extravagance.

The passing of the baton

In 1972, the Calzoleria was inherited by Bruno Ridolfi, Tito Petrocchi’s nephew. Bruno began working in the family workshop at 14. He learnt the painstaking techniques of shoemaking by closely observing every step and phase of the workshop’s craftsmen.

He became a meticulous modeller with exacting standards. During this period, Fendi, the Sorelle Fontana, Valentino and Capucci numbered among the Calzoleria’s customers, welcomed into the workshop in an atmosphere of mutual respect.

Under the management of Bruno, The Calzoleria continued its fruitful collaboration with the Teatro Sistina. The musical comedy authors Garinei and Giovannini and the singer Johnny Dorelli were frequent and loyal clients of the workshop.

Bruno also began a long and fruitful collaboration with Cinecittà film studios during this period.

In 1984, Calzoleria Petrocchi made the shoes worn by Robert De Niro in the film Once Upon a Time in America directed by Sergio Leone, also a lover of the workshop’s shoes.

Yet another successful film director, Francesco Rosi, was a client until his recent death. A pair of shoes made for him in our workshop in the ‘90s has now “returned home” to Petrocchi thanks to the generosity of his daughter, destined to become part of the Calzoleria’s collection of historical models.

In 2002, Calzoleria Petrocchi was awarded the Master Artisan prize by the City of Rome. The Calzoleria is a member of Roma Excelsa, a group of specialists and artisans expert in their fields. The workshop archive of designs and shoes has been certified an Archive of the Twentieth Century by the Italian Ministry of Cultural Heritage, in recognition of its considerable artistic and cultural value.

The Calzoleria Petrocchi is currently managed by Daniela Ridolfi, Bruno Ridolfi’s daughter and the third generation of the family in the business.

The current management and design team

Classic tastes with a modern twist

My passion for the ancient craft of shoemaking drives me onward in my desire to continue meeting the exacting standards involved in the production of personalised shoes.

Every member of my family has contributed to the success of our shoes. When my grandfather Tito Petrocchi opened his workshop in Rome in the late 1940’s, his wife Maria sewed the various leather pieces to form the uppers. As a child, I spent entire afternoons watching her as she constructed the models. According to the master shoemakers at the time, she was the best shoe sewer in all of Rome.

The boy who brought Maria the leather parts on his Vespa was Bruno Ridolfi. He met Maria’s daughter when he made his deliveries, and fell in love, becoming my parents. But this story of love between my parents was also the source of my love of shoemaking. As a child, the workshop was my playground, and I was fascinated by the way my father Bruno created shoes with his skilled artisan’s hands and designer’s eye in a simple yet complex game between form and material.

I was not much more than a teenager when I chose to follow in the footsteps of my father and grandfather and to carry on the story of our Calzoleria. I began to help my father in the workshop as soon as I had finished my law degree, and I have been the owner of the business since 2003.

My mission has always been twofold: to keep the ancient traditions of premium shoemaking alive and to offer bespoke footwear which reflects our times. Shoemaking is my passion and my love.

The Calzoleria Petrocchi relies on the collaboration of master craftsmen with thirty years of experience. We are a team of artisans and each is entrusted with one or more technical and productive aspects. This allows us to create a highly artisanal product built on the customer’s foot and on his stylistic and fit needs.

At Calzoleria Petrocchi website, you can choose among 20 ready-to-wear models, for men and women. Choose your favorite model, in different leathers and finishes.

Our bespoke shoe service is the choice of clients who desire particular and unique styles or who have personal requirements of fit and wear. Over 70 years of experience at your service.

You can find out more about which cookies we are using or switch them off in settings.

This website uses cookies so that we can provide you with the best user experience possible. Cookie information is stored in your browser and performs functions such as recognising you when you return to our website and helping our team to understand which sections of the website you find most interesting and useful.

Strictly Necessary Cookie should be enabled at all times so that we can save your preferences for cookie settings.

If you disable this cookie, we will not be able to save your preferences. This means that every time you visit this website you will need to enable or disable cookies again.

This website uses Google Analytics to collect anonymous information such as the number of visitors to the site, and the most popular pages.

Please enable Strictly Necessary Cookies first so that we can save your preferences!